After being T-boned by Tiger 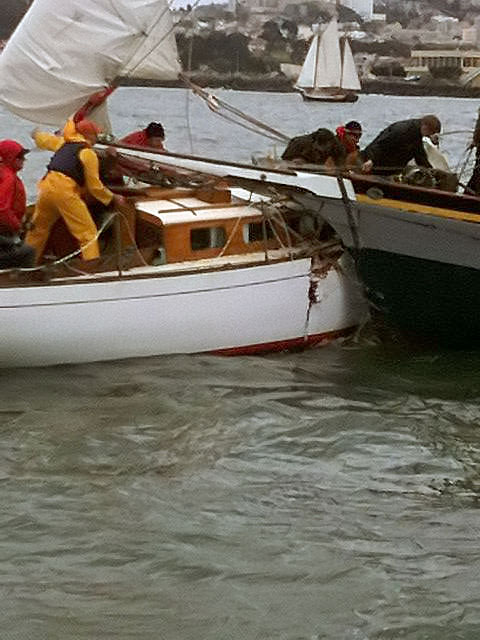 I am happy to report that the L-36 Eventide returned to the Bay on New Year's Day 2012. After our very well photographed adventures at the 2011 Master Mariners Race I faced a tough decision about whether to restore Eventide. Her hull had basically been sawed through from deck to just above the water line by the other boat's chain link bobstay, and her spruce mast and boom were shattered into multiple pieces beyond repair. Eventide had been so thoroughly restored by her previous owner "Chairman" Bob Griffith and given me so many good times that I decided that if I could find a used and affordable mast and boom that the hull was worth repairing. In what seems a nearly impossible stroke of luck, L-36 Papoose's owner Allen Edwards discovered that L-36 #32, Bellwether, was rotting away on the lien dock of Coyote Point Marina with what looked to be good spruce mast. Eventide is hull #31 - what a weird coincidence! I couldn't really tell if the mast was as good as it looked, but it seemed a good risk and a good sign so I took a chance, bought Bellwether, and hauled Eventide at the Berkeley Marine Center to start repairs.

Steve Hutchinson of Hutchinson Marine and his assistant, David removed and replaced a frightening large section of Eventide's starboard side. Although the damage was to a relatively small area, they spread the repair over a much larger area to ensure the hull's future integrity. Steve and David worked towards the center from top to bottom, duplicating the original Chapman and Kalayjian bead and cove, edge nails, and glue method, until the final plank was wedged and glued into place. Since the sail track was also damaged we repaired it with a small section of Bellwether's. Although only one chainplate was deformed I decided it was best to replace all of the starboard side. I couldn't find a local supplier so I ordered blank silicon bronze plate from Alaska Copper in Seattle and cut, shaped, and drilled the three new chainplates which were installed during the hull repairs.

In the meantime, I enlisted a few adventurous friends to tow Bellwether to Berkeley and salvage her mast and boom. It was sad to destroy another classic boat, but she had been abandoned for several years and based on the sections of rot we found above and below her waterline she would have needed a very committed savior. When I pulled one of her through hulls out by hand along with a 6 inch chunk of hull I felt very lucky to have made it from Coyote Pt. to Berkeley at all. It was pretty interesting to see from the inside how an L-36 is constructed, and how well all of the bronze bolts and fittings had held up. It took about 3 days of pretty hard labor by a bunch of people, including fellow L-36 owners Dave Custodio and Allen Edwards, to convert Bellwether from a boat into a dumpster full of wood. I found homes with other L-36's and other wooden boats for as much of her as possible. Ask me if you need something, I may still have some salvage parts.

As hoped, Bellwether's mast and boom were in beautiful shape, a twin to Eventide's, and needed just a few small repairs. Despite the wise and thoughtful advice of just about everyone; my next step was to remove all the hardware, strip that nice white paint, and varnish the spar. Now that the bright spruce and her 12 coats of Epifanes is up, I am glad I did it; but I'll admit that for most of the fall while I was sanding and brushing and sanding and brushing in the back of the Berkeley Marine Center I sure was wishing I'd taken the advice! Jay from BMC based Butler Rigging was very supportive and tuned up the all new standing rigging just in time for us to get out for New Year's Day. I don't know if it was his tune, or just that it had been 6 months since I'd been on an L-36, but Eventide felt faster than ever. I still have interior repairs to complete, but I look forward to seeing everyone at the starting line on Memorial Day - from at least a few boat lengths away.

Eventide could never have been saved without the help , advice, and support of many people especially Allen Edwards of L-36 Papoose; Cree, Karl, and all of the Berkeley Marine Center staff; Steve and David of Hutchinson Marine Services; Kip and Carol Keiper; Jack Saunders (finish varnishing those masts Jack!); and Jose Rivero, Chiara Swarthout, and Jason Hoorn. In addition, many other Master Mariners came by to voice support through the whole process. Many thanks to all of you.