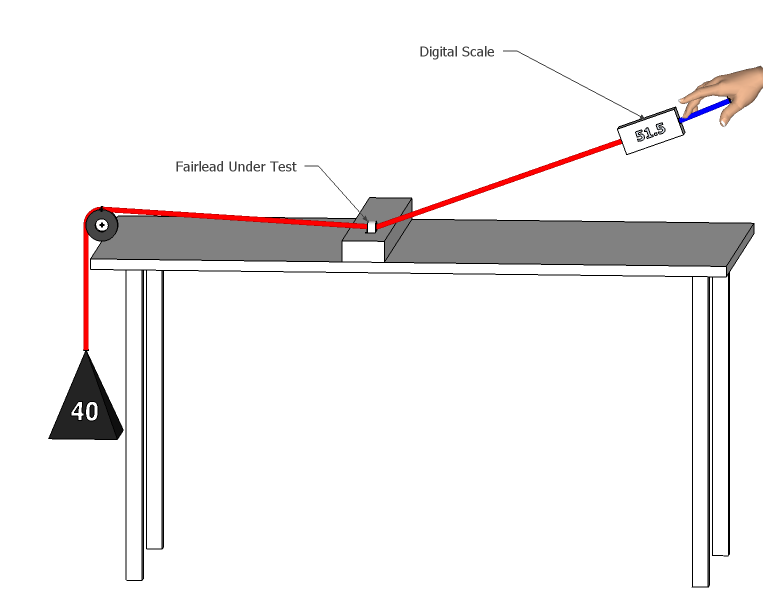 The test bench is shown above. It had a 40 pound weight hung over a low friction Garhauer block. The test fairlead was mounted in the center of the table and the digital scale provided the force reading. The height of the line at one foot from the fairlead provided the indication of the angle of pull. Of course, 90 degree and 180 degree numbers were obtained with just eye-balling the pull angle. I also did points using a 30-60-90 triangle to align the line. There was some scatter in the measurements but fitting a trend line through the data gave a reasonably good fit and clearly showed the difference between the two fairleads. 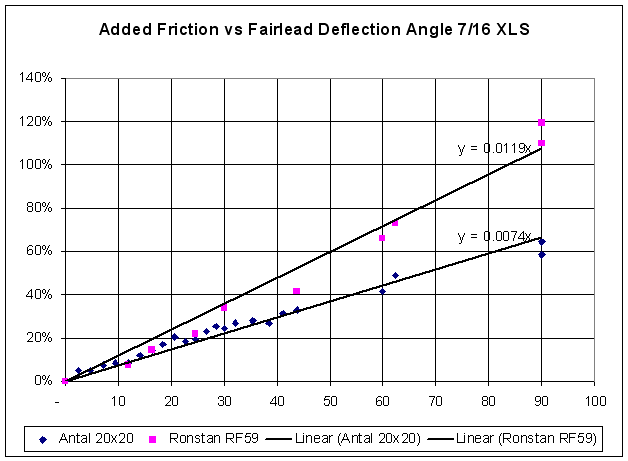 There really is no reason to think that the friction is anything but linear with deflection. To be non-linear, something would have to deform permanently or a new mechanism would have to come into play. The results show that the much smoother Antal fairlead has less friction than the steel lined Ronstan fairlead. The take away numbers are that the Antal has about 0.7% additional friction per degree of deflection. The Ronstan has just over 1% of added friction per degree of deflection. I would certainly say that for low deflections the $6 Ronstan RF59 might be the better choice compared to the $25 Antal 20x20. But if money is no object, the Antal is in a class of its own.

We learned things we probably already knew. A good fairlead is going to have a smooth gently rounded surface rather than a flat one with abrupt corners. We also learned that the loss due to friction is small for small deflections and increases linearly with deflection. Finally, we learned that with XLS the loss is around 1% per degree of deflection. Thus for a few degrees of deflection a fairlead is a fine solution. For an extreme bend, say 90 degrees, a block would be better.

What we want to learn with this further testing is how does Amsteel compare to traditional double braid (XLS). Also, by testing different diameters, we can see how the diameter influences the results. For this test I will use 7/64 Amsteel and 1/4 inch Amsteel. Again I used both the Antal 20x20 and the Ronstan RF59. 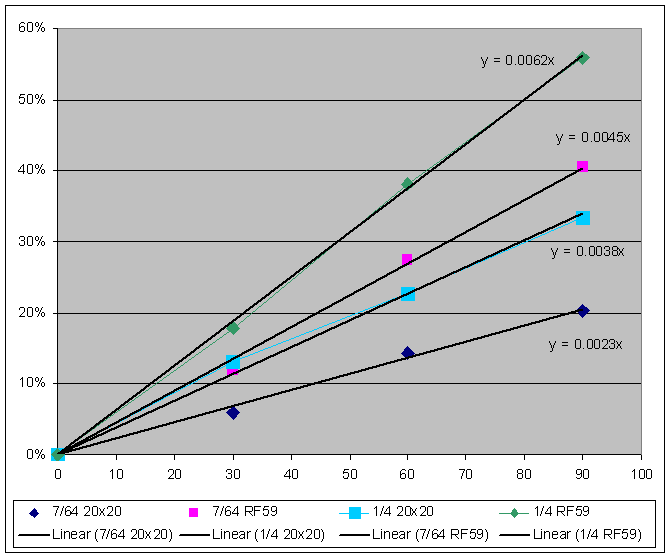 The smaller Amsteel gave the lowest friction and the Antal 20x20 outperformed the Ronstan RF59. All of these combinations had lower friction than the 7/16 XLS due to the smaller size and the slippery material.

The friction from the smallest line and the Antal Fairlead was just 1/4% per degree. That went up to 3/8% per degree for the 1/4 inch Amsteel. Switching to the not as fair Ronstan fairlead raised those numbers to 7/16% and 5/8% respectively per degree.

Look for Next Article in Series

The next article in this series will cover low friction rings. Included in the test will be Antal low friction rings, REI descender rings, and standard stainless steel rings.
Please read website Cookie, Privacy, and Disclamers by clicking HERE.