The test bench used a 40 pound weight hung over the edge through a Garhauer block. Measurements were taken with the digital scale discussed in the introduction.

I would consider the differences between the various round rings noise. The average loss from a 90 degree bend was 24% and from a 180 degree bend 32%. Notice however that the loss from the SMC ring was much higher.

A Simple One Part System 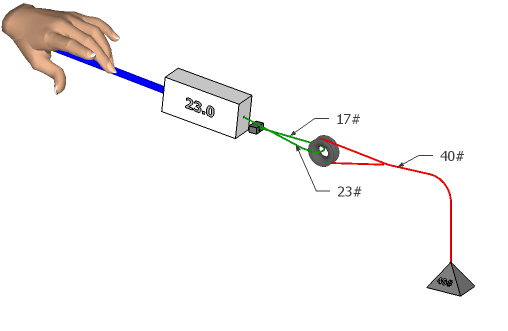 The system above is a simple "2:1" system. To analyze what the mechanical advantage is consider the pulling force required to lift the 40 pound weight. We know the loss through the ring is 32% so the force you pull on the line is 1.32 times the force delivered to the other side of the line you are pulling on with the rest of the force lost in friction. Both these forces pull on the ring meaning that the load sees 2.32 times the force on the anchored ring. The pulling side is 1.32 times the anchored side so the mechanical advantage is 2.32 / 1.32 or 1.75:1, just under the 2:1 frictionless case. In the example above, the pull is 23# and the anchored side sees 23# / 1.32 or 17#. The total pull is then 23 + 17 = 40 pounds. (There is some rounding in this example).

To check this and to serve as another example I built the system above and measured the pull required to pull my 40 pound weight up. It was exactly 13 pounds just like the theory from the measurements would say. This "4:1" system is 3.1:1 which is just what you would expect from a cascaded system where the individual blocks are 1.76:1. Please note that there is a small loss in the Garhauer block (not shown) so that there is really 41 pounds required to lift the 40 pound weight.