Starting on Time with GPS

Getting to the line at the gun going fast

Wouldn't it be great to have an application or device that would get you to the starting line right at the gun going fast. There are several phone/tablet apps that say they will help you do that and a few dedicated boxes that say they will do it better. 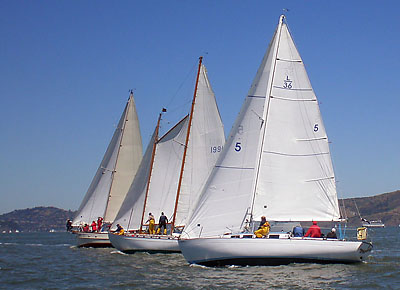 I have tried two Android apps, BC Racer and iRegatta. Both of these offer time to the line calculations as well as distance to the line. Velocitek Pro Start received a great review from Practical Sailing. Rock City Marine has a new Rock Box that is it is just about to release. Novasail has a box that missed the Practical Sailing article.

I have done preliminary testing with the BC Racer on the water. It looked promising. I tested iRegatta around the neighborhood and it had serious problems. Their algorithm for time to the line was so sensitive to slight variations in the path that I found it unusable. I suggested a new algorithm to the developer which he implemented and credited L-36.com. It looks promising mow with good results in my preliminary testing. I plan to review both these apps as part of this series of articles.

I have also contacted Rock City Marine and they will be sending me a unit for testing. I will report on that when I get it likely later this month. I have not contacted Velocitek or Novasail as of yet.

But before I test these dedicated apps, I am going to use a run of the mill Garmin GPS to make distance to the line measurements and see how that can help my starts. This will serve as on introduction to the problem as well as a benchmark that with which to show off the improvements of the dedicated solutions.

Knowing the distance to the line is a great thing particularly if I raced a small boat that accelerated quickly so I could sit at my target distance and start my approach at my target time. But I race a 12,000 pound 36 foot boat that takes a full minute to get to speed. There are other boats moving around and sitting at a particular spot, hundreds of feet from the line makes it more difficult to translate distance to the line to action.

Time to the line functions is wonderful for telling you that you are late or early. Then you change your course (assuming you are early) and now you can hit the line going slow but on time. Better than being over early but not exactly meeting the goal.

I have in mind a new algorithm not implemented by any app or box. Perhaps it will be some day. As there is no way to use this idea until someone implements it, there is no reason to write about it at this time. But thinking there is a better way is no reason not to look at what is out there. This is the first of a series of articles on using GPS devices to get to the line on time going fast.

Using a GPS for distance to the line 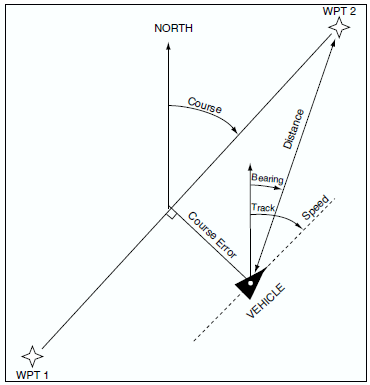 My tactician, Ernie, came up with this observation. Looking at this sketch at the left from the Garmin Manual.

Then note this definition of one of the built in functions: Off Course -- The distance left or right you have strayed from the original path of travel. Also referred to as 'cross-track' or 'course error'.

Now re-arrange the picture to get this.

What this says is that you can take a normal GPS and set a waypoint at the pin and another at the committee boat then set a course along the line. Now your "Off Course" readout will be the distance to the line.

Next you might ask how well does this work. In testing the initial reaction is not very well. But in further testing, the reason it doesn't look so good is that there are a couple of errors that can be taken into account and thus allowed for, others not so much.

The most obvious error is that your GPS is not at the bow of your boat. You might try to set your waypoints heading to the line from when the bow just hits the line and that might be fine. I think a better approach is to just allow for that distance. Set the waypoints when the GPS which you are holding, is aligned with the line, one on each end. This gives you the most accuracy on your waypoints and thus your line. Then just allow for the distance which in my case is about 25 feet. Thus, when the GPS says I am 28 feet from the line, I am actually at the line. It isn't that simple, but that is the general idea.

The other significant error is that, at least in my GPS, there is some averaging on the off course number. It seems to be about 4 seconds. If my boat is going 10 feet per second (about 6 knots). That adds another 40 feet to the equation. In addition, my GPS updates every second so at 10 feet a second, best to add another 10 feet so now when my GPS says 78 feet, I am actually there.

The final error is just the GPS error. Do you want to be early, late, use the GPS exactly or switch over to your judgement when you get to the line. I am thinking that using this I don't want to be early and as my last few starts have been very late, being 3 seconds late would be perfect by comparison. That is another 30 feet and is more or less consistent with allowing for twice the indicated GPS error of 14 feet.

I now have to allow 108 feet for the various errors. So when the Off Course function says 108 feet, I am there. But I am probably not heading right at the line. I am probably traveling at 45 degrees to the line. To allow for that, multiply by .707 and get 76 feet.

Analysis of a Start

Here is the GPS track of my last start. 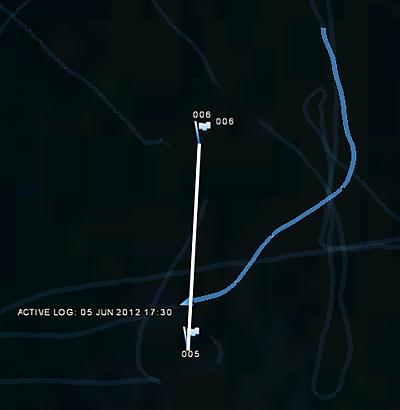 Our plan was to start our approach from a position more or less opposite the committee boat but out some distance. We got to that position and started. we felt we were early so fell off to travel further down the line as we like to start in clear air away from the crowd at the CB anyway. When we thought the time was right, we made our run to the line feeling we hit the line right on time. The GPS said we were 27 seconds late! Our handicap is 150 and the fleet runs from 75 to 170 so we are more or less in the middle. Our start wasn't bad and we were the first boat around the W mark.

Using Excel, we can analyze this start in some detail. I wrote a macro that calculates distance to the line from the latitude and longitude track. 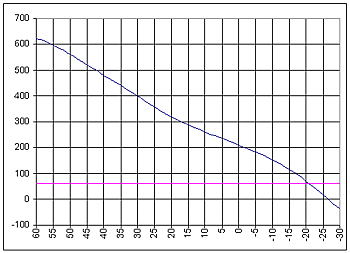 The first thing to note is that if we use the 60 feet number, we were only 20 seconds late. Second is that if we had known we were not early, we could have been only 10 seconds late. I guess that is why they say there is midline sag. We were midline and misjudged the line. We won this race by about 5 minutes adjusted and did get to the first mark before boats with lower handicaps so it is hard to say this 10 seconds cost us much but it is interesting to look back on what happened.


What is the Plan

Knowing how far I am from the line is only half the story. I also need a plan. Everyone will have their own plan as every boat is different. My plan is going to look something like this. Start my approach about 1 minute before the start at about 6.5 knots. I will then travel 658 feet as I close 465 feet to the line. My initial reading, heading to the line one minute out should be 542 feet. But I won't be heading to the line so I will try and be 542 feet from the line and start heading up before one minute and then adjust to some intermediate reference points as I approach the line. I will be try and read 76 feet right at the gun. I will let you know how it works out.

Well, for some reason the waypoints didn't line up with the line when we got around to starting showing 153 feet when I was just a couple of boat lengths away. Then the wind decided to create a big hole right at the line so we decided to start by reaching down the line. No boats around us so we reached down the line, crossed right at the gun and were away, without the GPS. That may be the way things go with these kind of starts or this might have been an unusual day. We got the best start but not the best test of using a GPS in a race. We won the race by the way.
Please read website Cookie, Privacy, and Disclamers by clicking HERE.