Around the Racecourse, Part 7: Gain at the Gate

A crowded leeward-gate rounding is a perfect opportunity to pass boats, and more often than not, the best solution is the path of least resistance. 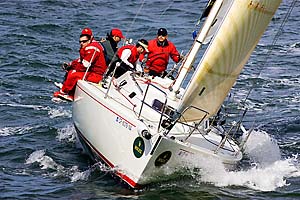 Having followed our advice of last month's installment in this Fundamentals series ("A Low-Risk Run"), you should be sailing downwind in clear air and on the headed jibe, approaching the leeward mark with a plan for the next leg. Now it's time to get around the leeward mark with minimal drama. As boats converge on the mark, traffic is inevitable, and it's here where you can make immediate gains or leave a lot of points on the table if you don't have a clean rounding. It's critical to make a few smart decisions before you hit traffic.

If the rounding is through a leeward gate, the decision-making process starts with selecting the gate mark that will allow you to execute your game plan for the next leg. As you approach the bottom of the run, ask yourself the following questions: Which side of the course is best for the next upwind leg? Which gate is closer? And what traffic issues, if any, will come into play?

First, pick a side
During the run you should think about where you want to go after the rounding. I usually consider what happened on the previous beat and how the run is currently playing out, trying to identify the conditions of the day and which side will most likely pay. I stick to the basics, mostly identifying where the most wind is, and which tack will be the long tack after rounding. I also factor in any influential racecourse features.

Assuming the gate marks are square to the wind, round the mark that sends you the way you want to go. If you want to go left upwind, for example, you should round the right-hand gate (looking downwind), and, if you want to go right upwind, you should round the left-hand gate. If you're unsure which way to go on the next leg, round the best available gate based on which one is favored (if they're not perfectly square) or has the least amount of traffic. Once you've rounded, look at your compass to figure out the lifted long tack, and get on it.

As you get closer to the gates and they become easier to see, try to determine which one is upwind (closer to you), if they're not square to the wind. The gate marks are typically identical in size, so the closer mark will appear larger. For a second opinion, I ask someone on the crew to help me determine which one is closer. If they appear to be the same size, they are likely even.

Sometimes the race committee will set the gate marks before the start, and you can check any bias before the race, just as you would for the starting line. Go head-to-wind between the marks and note which one your bow points to. This is the favored gate.

If there's no traffic, you should round the upwind, favored gate. Rounding the upwind gate is actually a double bonus. A gate mark that is, for example, one boatlength upwind of the other does not look massively different. But it's actually a two-boatlength gain if you round it. Think about it: you're sailing downwind, even with another boat, and the two of you split gates. You observe and choose the bigger looking gate and your competitor splits to the other. As you begin to round your mark, your competitor must still sail one boatlength downwind to get to his mark, and then he has to sail one boatlength back upwind to get to the same spot.

The answer lies in how much traffic is coming downwind, and whether tacks are costly in your boat. Here you have to weigh the advantages of the upwind gate versus the disadvantages of tacking and sailing through a wall of spinnakers. If your boat tacks efficiently, and the traffic is light, then round the upwind gate and tack. If traffic is really thick and/or the conditions are not conducive for tacking, go ahead and round the unfavored mark and sail straight, especially if you feel strongly about getting to that side. Remember, too, that you can also round the upwind gate and wait for all of the spinnakers to clear out then tack. The tactician must determine if getting to the favored side as fast as possible is worth sacrificing those two boatlengths.

We had a scenario much like this a few times at the recent Etchells Worlds in San Diego, where we wanted to go right on the second beat, but the right-hand gate (looking downwind) was closer to us as we approached (sending us left upwind). We decided to round the favored gate and wait for a good lane to tack after the spinnakers, then head right. Our bias toward the right side was more of a hunch than a must-get-right scenario. In more than one race we rounded the favored right mark, sailed straight for a minute until most of the spinnakers went by, then tacked to go right. In each case, our move worked out well. Often we found ourselves with a wide-open lane heading right, compared to those who rounded the left gate and were pinching in narrow lanes.

Factor in traffic
Now that you've determined the preferred gate, based on which way you want to go upwind, and which one is closer, you must factor in traffic. This can change everything. If your desired gate is crowded, the opposite gate can offer an excellent escape route. The more boats at a mark, the more chance for pileups, protests, and general drama. I have seen many people gain by keeping speed and avoiding crowds of boats.

I made a costly gate choice recently at the Melges 24 Worlds because of traffic. While approaching the gate marks, I saw the left gate was many boatlengths downwind, and no one was going there except for Nathan Wilmot, the 470 gold medalist from Australia. But it looked so far downwind that I decided to round the upwind gate with more traffic. It turned into a huge loss, as we got tangled up with another boat, fouled them, and had to do a penalty turn. In the end, we had lost upwards of 10 boatlengths.

Round wide, then tight
Once you have chosen your mark, it's critical to round it well. A poor mark rounding can cause a downward spiral from which you can never recover. The worst possible outcome is to get pin-wheeled outside into bad air and being unable to tack away. I especially avoid getting pin-wheeled around the right-hand gate mark because everyone on your windward hip is on starboard and you can be pinned indefinitely. If you get pinwheeled around the left-hand gate mark you can foot away and then tack to starboard, painful as that may be.

In a crowded rounding, you want to approach somewhat wide of the buoy and complete most of your turn before your bow passes the mark. In doing so, you pass the mark on a close-hauled course. Exiting tight gives you the best chance of clear air. Most skippers do not start their turn wide enough, or far enough away from the mark. If you start too tight, you end up rounding wide into a bad lane or turning too hard, dramatically slowing the boat.

At the Etchells Worlds, I was amazed at Dennis Conner's roundings, He did a wide-then-tight rounding with great speed, and then almost went head-to-wind briefly before bearing away to his close-hauled course. His jib was completely luffing for a few seconds, but he used the boat's momentum to glide to windward just after rounding, giving him a better lane. He lost a little forward speed by luffing, but it saved him from having to tack into the spinnakers coming downwind. It's all about how you look after rounding the mark that matters.

Crowd Control
If you're in a crowded situation as you approach the mark, you want to establish your position by communicating with your competitors and rounding in single file, or at least on the inside closest to the mark, if there are overlaps. It's usually best to slow and wait your turn so you can round wide and tight. Dousing your spinnaker early can help, or you can sail extra wide once your position in the lineup is established: you want to kill time without killing speed. Slowing techniques work well because they not only allow you to round close to the mark, they give you some distance on the boat ahead, giving you clearer air. With a nicely executed leeward-mark rounding, you have the option to pinch and go straight, or tack, which is all you need to execute any plan.