This double ended soft shackle is the 4th generation of a design that can attach to a pair of eye spliced jib sheets to the clew of a sail very quickly. It is also the 5th version of this generation as improvements were made to make the shackle stronger. In use, the shackle is secure around the jib sheet prior to being "clipped" to the clew. This version is easy to make and has the advantage of a non-constricting hold on the jib sheets. There are links to the previous versions at the bottom of this page

The shackle has two sections. The short section will attach to the Stopper Knot. That needs to be long enough to allow the shackle to open enough to pass the stopper knot thought the loop. I used 4 inches. The shackle is held together with four knots. On the end forming the stopper for one of the shackles is a diamond knot. The other end attaches to a separate stopper loop which also has a diamond knot. The center of the double shackle has what is basically a double bowline and tripple strangle hitch. I started with simpler knots, straight bowline and single strangle hitch and kept increasing the complexity to eliminate failure modes.

I tested this shackle with 7/64 Amsteel using a 5/32 stopper knot. The shackle more or less exploded on failure with breaks at the eye, the bowline, and the strangle hitch. This design went through many iterations, each stronger than the one before. Note that while the force on my 30:1 power winch was considerable, nearly as much as I could manage, it is only roughtly calibrated and the force was less than the line breaking strength as I had a test section of straight line and it did not break.

My estimate of the the force is based on measuring the stretch of the 7/16 XLS line that I use around the winch. The stretch was 3/4 inch in one foot in my last measurement before the shackle broke. A 53 pound weight hung on the handle at right angle to the nandle will stretch the line 5/8 inch. Working the math on this would indicate that the shackle broke at 1,900 pounds, which exceeds the rated breaking strength of 7/64 Amsteel. However the test section did not break so it is not as strong as the line, but it is strong.

To view the carnage from all the testing click HERE.

CAUTION: Be sure to do your own testing before using these. Safety is your responsibility not mine.

Note: For maximum strength of the double soft shackle, use the next size up line for the stopper knot.

Using the calculator from the Soft Shackle Howto, measure off a piece twice the length of the first mark. Double the line over, tape it at the fold, and tie a diamond knot using the two ends. Lock it by placing the ends in a vice and pulling on the loop with a lever of some kind. I use a hammer with the had as the fulcrum and the loop on the handle near the head. 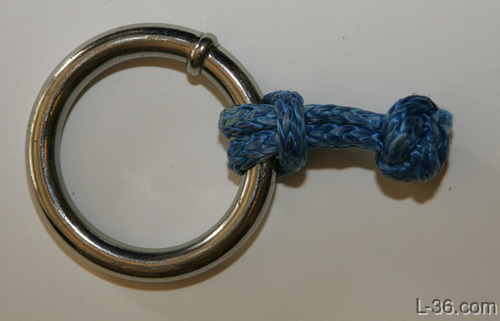 How to Make The Double Shackle

These instructions are for 3/16 Amsteel. The shackle uses 56 inches of line. For other sizes, just scale these numbers by the ratio of the line size. For example, for 5/32 Amsteel, multiply all these numbers by .833 so instead of 56 inches use 47 inches. Version 1
Version 2
Version 3