UPDATE. Moisture remained nearly constant from the last 24 hours in the 17/00Z sounding from San Juan. A few showers developed over Puerto Rico. Most occurred after 6 PM AST. A sideways Y pattern (without the base leg) developed in the west and a few showers moved south of San Juan from Rio Grande. All the showers lasted less than 30 minutes. An area of very dry air is in the process of moving through Puerto Rico with a minimum RH at 850 mb expected at 17/03Z. Some patches of moisture move into the eastern portion of the forecast area after 17/10Z, but the best moisture is still expected to cross over San Juan from the east at 18/04Z.

Actually little change is expected until Sunday afternoon, when moisture improves and scattered showers are supposedly able to develop over the U.S. Virgin Islands and eastern Puerto Rico.

No grid changes have been made to the non-marine grids so no zones will be issued for an update.

Generally fair weather is expected overnight tonight into tomorrow, with dry, stable air aloft and only patchy low-level moisture. As one of those patches of moisture pushes over the area tomorrow, isolated to scattered showers will be possible during the afternoon and evening. This pattern will hold over the next several days - generally fair weather with isolated showers, and isolated to scattered showers with the occasional patches of moisture passing through the area. Seas of up to 5 feet are expected across the local waters through the weekend, followed by building seas for the start of the next workweek with the arrival of a northerly swell.

A strong mid-level ridge remains in place over the next several days, and is associated with dry, stable air aloft, capping moisture below around 800-850 hPa. Additionally, there is below-normal levels of moisture in the low levels tonight into tomorrow. As such, shower activity is likely to be limited, though a few isolated showers cannot be ruled out. A patch of low-level moisture is forecast to push into the region during the day tomorrow. Near-normal levels of moisture are anticipated, likely starting around mid-afternoon. As the peak moisture will likely be in the east during the afternoon, that is where there is the highest potential for showers during that time period. With precipitable water values in the west expected to be below normal during the afternoon, shower activity is likely to be somewhat inhibited, especially considering the fact that the capping inversion will still be in place. Another patch of moisture is possible late in the day on Monday and could lead to another marginal increase in shower activity; isolated to scattered showers are expected. Isolated showers cannot be ruled out during the drier periods as well.

The ridge pattern aloft is expected to hold through the long term period, resulting in very dry and stable conditions aloft. Therefore, mainly fair weather conditions will continue to prevail across the local area. However, patches of low-level moisture embedded within the easterly trade wind flow will move over the area from time to time. These patches will bring with it low-level cloudiness as well as some passing showers, with activity possible across portions of the USVI and eastern Puerto Rico during the overnight and into the early morning hours followed by some locally and diurnally induced afternoon activity across western Puerto Rico. Rainfall accumulations for the most part with any activity should remain on the light side.

VFR conds expected for the next 24 hours. East winds at 10 - 15 KT with occasional gusts and sea breeze variations through 16/22Z, becoming light and variable thereafter. The local winds will become easterly at around 10-15 KT once again after 17/13Z, with sea breeze variations. No significant hazard is expected.

Seas of up to 5 feet continue across the local waters through the weekend. A northerly swell is still expected to arrive by the start of the next workweek, leading to building seas, especially in the offshore Atlantic waters and Anegada Passage. There is the potential for hazardous marine conditions in those areas, though there is some uncertainty, especially considering how borderline the model guidance has been with respect to this potential over the last day or two; the highest significant wave heights for the local waters have generally been between 6.5 and 7.0 feet. Though it has trended slightly upward with the most recent model run, maximum values have remained within that range. The timing on this would likely be Monday night into Tuesday morning, possibly lingering into Wednesday for the offshore Atlantic waters. At least, though, seas will be at around 6 feet for portions of the local waters. Those with marine interests, especially operators of small craft, should monitor future forecasts for updates as we move into next week.

For the beachgoers, there is a moderate risk of rip currents at northern beaches of Puerto Rico, as well as northern and eastern beaches of Culebra and St. Croix.

SJU WATCHES/WARNINGS/ADVISORIES. PR . None. VI . None. AM . None. 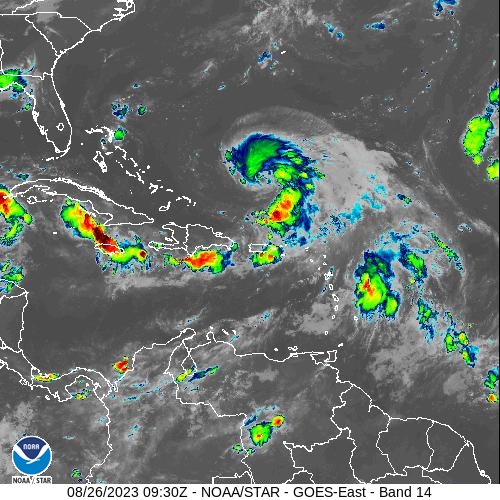