SHORT TERM (Tonight through Friday night): A 500mb low/trough across the Texas/Oklahoma panhandles tonight will move eastward across the southern plains Friday At the surface. low pressure over the Texas panhandle this afternoon will move slowly eastward into north Texas Fri morning and this will bring a cold front across west Texas tonight and into southwest Texas Friday. Patchy fog will develop across deep south Texas tonight with areas of fog developing across the coastal sections late tonight and continuing through Fri morning before a pre-frontal trough moves through the Rio Grande Valley Fri afternoon bringing drier air across the CWA from west to east In addition. isolated to scattered showers will develop across the lower Texas coast Friday before the surface trough moves offshore. The cold front across southwest Texas Fri afternoon will move offshore the lower Texas coast Fri night bringing an end to rain chances. Cooler air will filter into deep south Texas in the wake of the front Fri night. Lows tonight will be above normal and slightly below normal tomorrow night. Highs Friday will slightly above normal to above normal . especially across the western portions of the CWA where some compressional heating is expected with drier air moving into the northwest ranchlands and upper RGV during the afternoon.

LONG TERM (Saturday through Thursday): Modest CAA behind a cold front passing through Deep South Texas and the RGV on Friday evening will cool down the weekend to slightly below normal temperatures with highs in the lower to mid 70s and lows in the 50s. Saturday will be dry, but the combination of the return of a moist onshore flow and another shortwave that passes through the state on Sunday could bring a slight chance of some isolated showers to the area, however, have mostly gone with silent PoPs for the Sunday into Monday period until confidence is higher.

Early next week, mid level ridging will build and broad high pressure over the eastern CONUS will maintain moderate southeasterly winds across the area. A trough will form over the western CONUS mid week and the interaction between this trough and high pressure over the eastern CONUS will accelerate winds across Deep South Texas as the pressure gradient tightens. Winds may be high enough (particularly along and east of the I-69E corridor) to necessitate a Wind Advisory on Wednesday and possibly again on Thursday, but have kept winds below criteria with this package. These onshore winds will also allow for a warming trend through the end of the period.

With a large fetch of east to southeasterly winds across the northern Gulf of Mexico through the workweek, the lower Texas coast will be impacted by slightly elevated swells, likely increasing the risk of rip currents. Even though the weather should be pleasant at the beach mid to late week next week, beach-goers should pay attention to the flags and signs at the beach and be very cautious if entering the surf.

Saturday through Tuesday . A cold front on Friday will bring moderate northerly winds, likely agitating seas and meeting SCEC criteria on Saturday. As high pressure moves to the east, a large fetch of moderate easterly winds will develop across the northern Gulf of Mexico, increasing wave heights into early to mid week.

Link to 5 minute data for KSPL

(on/off)   Help Weather Map
GEOS Local Image of    EDIT
NOTE: This section has been updated as of 1/26/2021. If the image you are expecting is not showing, please let me know. You may use the EDIT function to update your location.
Link to Loop 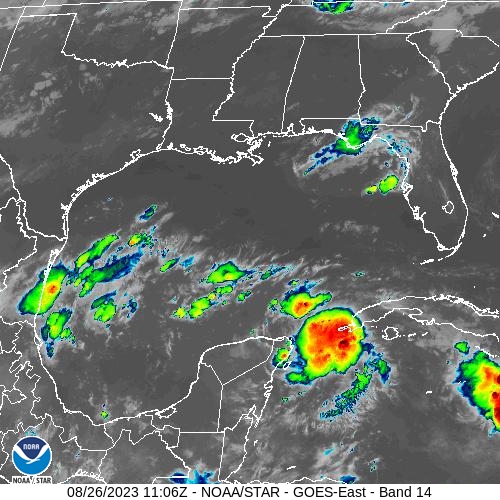