Synoptic Overview: WNW flow aloft will prevail over the region, on the NNE periphery of an amplifying upper level ridge over the Desert Southwest and Southern Plains.

Through Tonight: Weak/broad high pressure in the lee of the Northern Rockies (assoc/w subsidence in the wake of shortwave energy progressing eastward across the Northern Plains) will extend southward into the Central Plains as an effective cold front shortly after sunrise this morning, with winds shifting to the N and increasing to 20-30 mph in the wake of the fropa. Short- lived as it may be, this change in airmass should be sufficient to offset what would otherwise be additional warming (beneath the amplifying ridge) -- keeping highs in the lower-mid 90s. Dry conditions will persist, i.e. convection is not anticipated.

For the extended period the models are showing a pattern of an upper- level ridge over the High Plains between two troughs over the Idaho Panhandle and the Great Lakes region/Southeastern US. By Tuesday, the ridge will move out of the plains and into the Great lakes region while the trough moves in and replaces it over the northern Plains. At the same time an high height center builds over the Mexico/US broader. This will set up a zonal upper-level flow over the local area for the rest of the period.

For the rest of the period, the NBM is showing mostly dry conditions as the area will be under the the influence of the upper- level high centered over Texas. However, it is possible that another shortwave could move off the Front Range and into the local area so isolated isolated showers/storms can not be ruled out.

As for temperatures, Monday will be in the upper 90s up until the front moves through. Behind the front the region will see highs reaching the upper 80s during the middle of the week before a warming trend brings highs back into the upper 90s by the end of next week and into next weekend.

A brief period of MVFR ceilings cannot be ruled out at the MCK terminal shortly after sunrise this morning Otherwise. VFR conditions will prevail through the TAF period. Winds will abruptly shift to the NNW-N and increase to 15-25 kt gusting up to ~30 kt in the wake of an effective cold frontal passage this morning. Expect the breeziest conditions during the late morning, with winds veering slightly to the N-NNE and decreasing to 12-18 knots by mid-late afternoon. Winds will further veer to the NE-ENE and decrease to 5-10 knots tonight.

GLD WATCHES/WARNINGS/ADVISORIES. KS . NONE. CO . NONE. NE . NONE.

Link to 5 minute data for KGLD

(on/off)   Help Weather Map
GEOS Local Image of CentralPlains    EDIT
NOTE: East coast views moved to GEOS-16. They are experimental and not well supported by NOAA so they may not be correct so be warned. This change required redoing a large amount of the GOES code. If the image you are expecting is not showing, please let me know. You may need to use the EDIT function to update your location.
Link to Loop 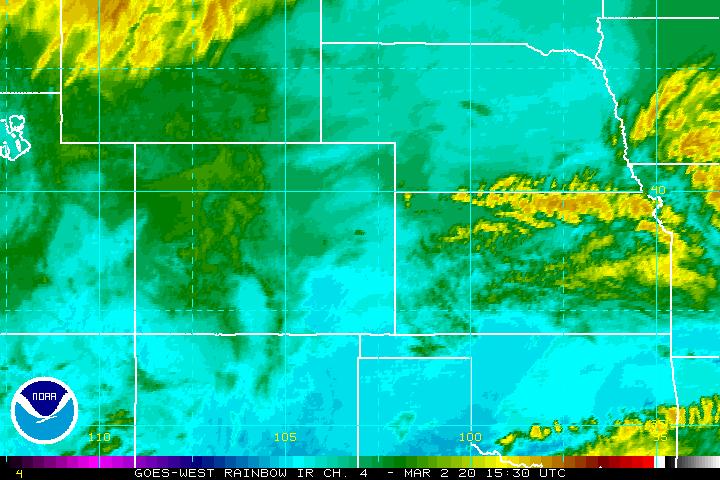